The international meeting on “Review of the latest developments in Kashmir and the abolition of its autonomy by the Indian government,” was held at the International Association of Muslim University Professors, on Saturday 31st of August 2019, with a lecture by Mr Pir Mohammad Molazehi, political expert on Indian subcontinent. 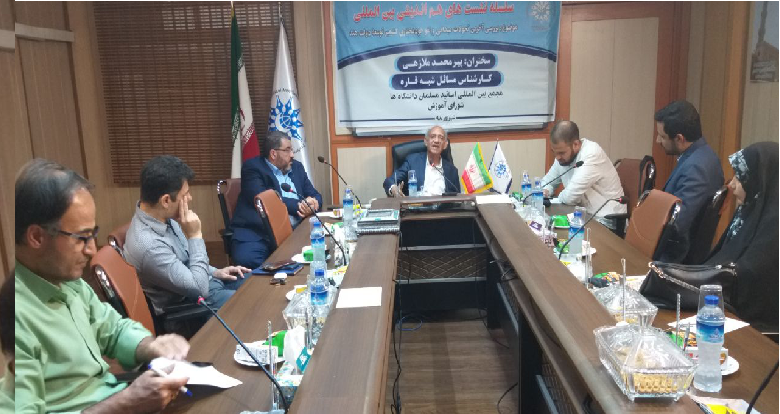 In this meeting, Mr Pir Mohammad Molazehi, first spoke of a realistic view of India's approach to the Kashmir issue. In this regards, he argues that Mr Narendra Modi (the Prime Minister of India) has made accurate calculations and at the best time, abolished Article 370 of the Constitution concerning Kashmir's autonomy and deprived the local government of all powers. Modi's main goal is to change the population’s composition in favor of Hindus in Kashmir. In the not too distant future, it can be predicted that there will be a population mix with a majority of non-Muslims; and it is in this case, that they will allow a referendum.
This international expert on the subcontinent issues, listed the characteristics of Kashmir as follows:
Kashmir is the intersection of three Confucian, Buddhist and Islamic thoughts.
Kashmir is the world's top roof, and anyone who dominates the area can monitor India, Pakistan, Afghanistan, Tajikistan and China.
Kashmir has many water reserves, making it one of the rainiest areas in the world. There are areas of Kashmir which has up to 12 meters of annual rainfall and Kashmir has several high water rivers. This is why the Arab states of the Persian Gulf, including Saudi Arabia and the United Arab Emirates, have been silent about the abolition of Kashmir's autonomy and are not making any moves or protests.“There are currently three views among Muslims in the Kashmir region,” he said. “Groups such as Jaish al-Muhammad believe that Kashmir should be annexed to Pakistan. Another group believes that Pakistan is a backward country and is facing a lot of financial difficulties so Kashmir should instead join the Indian state. There is also a third way of thinking which is following the independence from India and Pakistan.”
Molazehi continued: "India has realized the importance of the big deal (negotiating with the Taliban) in the region. In the big deal, if an agreement is reached, the Taliban will hold at least 50 percent of power in Afghanistan. With the disappearance of ISIS and the jihadi-takfiri groups in Iraq and Syria, these groups have lost their land. With the empowerment of Taliban, these groups will be able to start their operations once again; Therefore, in talks with the Taliban, Mr. Zalmay Khalilzad (US Representative in Taliban Talks) imposed a Taliban commitment that the jihadist groups would not act against the United States and its allies in the region. But there has been no mention of other countries. India has realized this fact and that if this big deal takes place in the future, the Kashmir region will have trouble with the jihadist groups.”
In the end, this political analyst predicted several possible scenarios:
India will face the uprising of the Muslim people; In this case, the Indian army will welcome this scenario, as it will repress Islamist groups under the pretext of counterterrorism.
The next scenario is the war between Pakistan and India. In this case, India's chances of winning are much higher, unless the two countries' war reaches the use of non-common and nuclear weapons, which is very unlikely to happen. Furthermore, the international community will not allow this.
The next scenario is for Mr Narendra Modi's party to be defeated in the next election and the Indian National Congress get elected. Under these circumstances, the situation returns back to the autonomy state, yet given Indian’s strong support for Mr Modi, the likelihood of this scenario is weak.
From the point of view of Mr Molazehi, what is more plausible and realistic, is that the Indian and Pakistani governments accept Kashmir as a center line and backbone. He believes that in this conflict, the countries of the Islamic world cannot play a key role.
Mr Seyyed Sarbaze Ruhollah Razavi, a Kashmir-born student of Al-Mustafa International University, also reflected on the recent developments in the region: "What happened was that the autonomy of Kashmir was abolished on 5th of August 2019. Article 370 of the Indian Constitution, which referred to the incorporation of Kashmir into India (not its merger), was repealed and Kashmir was merged into India. India has already prevented Hindus and domestic and foreign tourists from entering Kashmir in the face of possible terrorist attacks from Pakistan and has created a quasi-military state in the area to counter the possible reaction of Kashmiris. The reports on the situation in the region are extremely shocking. The central government suppresses any protests by the people in any way. The Indian government has taken a firm stance towards Kashmir.
Mr Razavi added: “Head of protesters in Kashmir, including Syed Ali Geelani, a prominent figure in the pro-independence movement, have called on the people to continue their protests peacefully and to refrain from any violent acts. I think this statement was very clever. Gilani has emphasized on protesting but peacefully. Such moves can have an impact on the Indian government.”
“India has adopted an iron fist policy towards Kashmir,” Mr Razavi concluded. “In the international arena, neither Pakistan nor even other countries can be effective.”
Then, Mr Pir Mohammad Molazehi talked about what the Resistance movements and the Islamic Republic should do towards Kashmir: “There are two types of approaches for the Islamic Republic: 1- ideological approach, 2- realistic approach. In the first approach, the Islamic Republic, according to the Islamic ideology, should firmly condemn the revocation of Kashmir’s autonomy and condemn India. Although due to the current state of Iran with the US sanctions, this may not be a wise option.
“Kashmir is said to be a small Iran, and they have many cultural and historical commonalities together. But I believe that the Islamic Republic of Iran must strike a balance between these two approaches.”